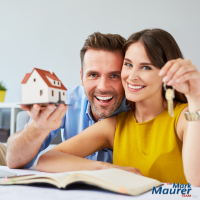 In recent months you have probably seen the headlines (because they’re everywhere) – parts of Canada are facing a housing affordability crisis. The COVID-19 pandemic has accelerated the needs for Canadians to own a home where they can safely socialize on their own terms. In cities across the country, housing has become so expensive that it seems middle income individuals just can’t afford to buy. While that may be absolutely true in other cities across the nation, it’s not always the case in Kitchener-Waterloo. Instead, this area remains more affordable than many nearby cities.

The rapid increase in housing prices is a big cause for concern due to two main problems. First, job growth has stagnated in some areas. Private sector growth is hitting numbers like 10%. Public sector growth is a bit higher, but there’s one other problem to go with those job growth numbers – median incomes. For most families, the median income has remained the same, even in the face of the housing costs increasing across the country. Fortunately, Kitchener-Waterloo seems to have an edge. Our job growth numbers look amazing with a recently released Ontario Chamber of Commerce report suggesting that economic growth in the area will continue to gain momentum thanks to exports and investment spending in manufacturing and the tech sector. This helps to shield our area from stagnation of job growth.

The Canadian Real Estate Association regularly ranks cities and townships as affordable by comparing the average prices of residential dwellings in and around the area. The lower the numbers, the more affordable the general area. In these studies, Kitchener-Waterloo almost always ranks as one of the more affordable places to live. In September of 2020, the average price of a home in this area was just about $637,691. In greater Toronto, it was hitting $1,058,667. Moving to the West Coast certainly isn’t going to save you any cash. Vancouver was recently ranked as the most expensive city with average home prices coming in at $1,300,000.

Wondering why this area remains affordable? There are a few reasons. One of the most likely reasons is the fact that there’s a consistent level of housing inventory in the area. In May of 2015 alone, there were 1,200 new listings. Sellers have to stay competitive in this environment to keep in line with market conditions.

There are also a number of incentives to buy a home in the area at the moment. Waterloo launched their Affordable Home Ownership Program, offering individuals and families a loan to help cover the down payment of a home. Buyers can receive up to five percent of the purchase price as long as: the home is located in the Waterloo Region; has a purchase price of $243,300 or less; and is approved by the region itself. There are guidelines for eligibility, but it’s certainly a helping hand for many buyers.

The other likely reason for the lower prices in this area is the fact that historically low interest rates mean there’s a stronger pool of potential buyers. As the interest rates go up, the chances are good that the number of buyers will go back down, as may the total number of sellers.

Home Prices Aren’t the Only Reason to Consider Kitchener-Waterloo

Besides the fantastic deal you could get on a house here, there are a number of other reasons to consider this area. Kitchener has a long list of things to see and do. It’s close enough to metropolitan areas like Toronto, and there is easy access to Highway 401. Once you’re here, though, you probably won’t want to leave! There’s a highly diversified economy attracting people from a wide range of cultures who have made this area nothing short of amazing. The diversity here, along with great schools, an invested infrastructure that just keeps getting better, and robust arts and culture environment make this the best place to live if you’re considering the Waterloo Region.